'Kitchen Power’ - a new exhibition examining the effect of rural electrification on women in Ireland in the 1950s and 1960s was recently launched by former President of Ireland Mary Robinson at the National Museum of Ireland - Country Life, in Turlough Park, Castlebar, Co Mayo. 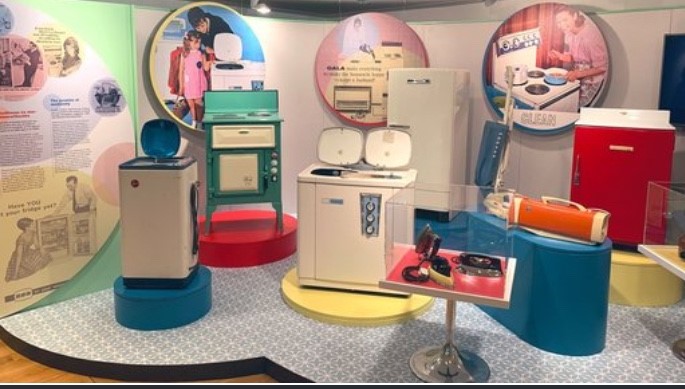 The first phase of ESB's rural electrification programme began in 1946 and ran until 1965 with a post-development phase running into the 1970s. Although many women in rural parts of the country worked in offices and shops, as well as on the farm, the marriage bar and prevailing cultural attitudes meant that much of women’s experiences of rural electrification were at home, where the kitchen was the focus of domestic work.

The exhibition explores how domestic electrical products were advertised and promoted as part of a modern lifestyle - moving from the traditional hearth to the fitted kitchen without challenging established gender roles.

Along with artefacts and oral history recordings, many from members of  the Irish Countrywomen’s Association - ‘Kitchen Power’ also includes an ‘Electric Irish Homes textile art project’ commissioned by Age & Opportunity as part of the Bealtaine Festival, who engaged with Sligo artist Anna Spearman to work with local women in Mayo to respond creatively to the Exhibition.

Also a reconstruction of a 1950s ESB/ICA model kitchen is featured, which was constructed in the Museum galleries by Phillip Carey, a final year BSc (Hons) Furniture Design and Manufacture student at Galway-Mayo Institute of Technology, Letterfrack campus.

Speaking at the launch, Director of the National Museum of Ireland, Lynn Scarff said:

“We are delighted to have partnered with Kingston University, the Arts & Humanities Research Council (AHRC) and the ESB in the development of this Exhibition, and we’re grateful to everyone who has contributed to it. A special thank you must go to the women who shared their stories, the exhibition is all the richer for their fascinating first-hand accounts of how electrification impacted on their lives.”

“This exhibition provides a fascinating insight not only into the transformative effect of rural electrification on the lives of women, but also the pioneering role that women played in driving the early adoption of electricity - from the ESB-employed demonstrators whose job it was to educate people on the use of new electrical appliances to women in partnership with organisations such as the Irish Country Women’s Association (ICA), the IFA and Muintir na Tíre, who saw the potential of electricity and championed it within their communities. As we look to a future where clean electricity will play a vital role in addressing climate change, we need to harness the same creativity and leadership within communities to demonstrate the benefits of electric transport and heating, and in doing so create a brighter future for all.”

For further information on the exhibition visit https://electricirishhomes.org/