An archive research facility documents ESB’s unique contribution to the social, cultural and economic development of the Irish State

When we flick a switch to light a room, turn on the TV, charge our mobile phones or put on a wash, we rarely think about the revolution that has made all of this happen.

Founded in 1927, ESB has led what has been called ‘a quiet revolution’ since then – from the Shannon Scheme to rural electrification to the building of innovative power stations such as Turlough Hill.

It was a quiet revolution that touched every city, town and village and reached into every home over the past 90 years and transformed how we live. ESB is almost as old as our State and its history is inextricably linked with the development of modern Ireland. 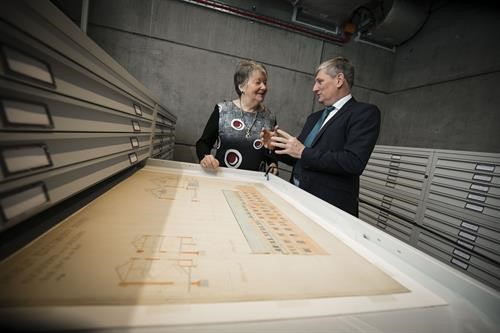 Now the history of that revolution has been captured, chronicled and housed in a purpose-built archive building. Located on St Margaret’s Road in Finglas, Dublin the A+ building preserves and makes accessible over 90 years of historical records documenting ESB’s unique contribution to the social, cultural and economic development of the Irish State.

“We realised in the early 90s that the material needed to be collected and preserved as carefully as possible for future generations and it has always been our intention to house it in a proper building and not only to have that building to the highest archival standards but also to have it with a low carbon footprint,” explains Brian McMahon, manager at ESB Archives.

The building itself speaks volumes about the journey ESB has made in area of sustainability. The archive is the first building of its kind in Ireland to adhere to the newest international standards for conservation of cultural heritage, BS EN 16893.

Designed by an in-house cross-functional ESB team, the building provides the highest levels of energy efficiency, including an array of roof-mounted solar panels. Electricity, through use of heat pumps, is the primary source of energy for heating and cooling systems. It is the first commercial building in Ireland to achieve BER A1, ‘net-zero’ energy consumption and ‘net zero’ carbon footprint.

The low passive sustainable design ensures that the archive repository is maintained at the correct temperatures and relative humidity throughout the year to ensure the permanent preservation of all record formats.

The establishment of the archive research facility underlines ESB’s longstanding commitment to preserving the rich stories since its foundation in 1927. It is a treasure trove for historians, researchers and academics who can view the archive by appointment. ESB’s collection now comprises over 11,000 archival boxes of documentation, 500 small artefacts, over 15,000 photographs, 1,500 glass negatives, 46,000 digital images, 6000 VHS/DVDs, 500 cine-reels and hundreds of oral interviews. It is not only the volume but the quality of the material that makes this a collection of both national and international interest.

Parts of the collection are available to view on www.esbarchives.ie

“Our top stories have been digitised and the information is now at people’s fingertips on the website 24/7,” says Brian McMahon.

A key feature that McMahon is keen to highlight is the interactive map which provides details of how and when more than 1,300 Irish towns, villages and parishes were connected to the national grid. Users can see when their respective area was connected.

“Our interactive map shows how every local community across the country was touched socially and economically,” says McMahon.

Before the foundation of ESB, about 340,000 Irish homes had electricity, supplied by local authorities and private companies. The country had the second lowest consumption of electricity in Europe. The Shannon Scheme led to the establishment of ESB in 1927 and was the first national electricity system in the world to integrate all the components of the electricity supply chain – the generation, distribution, marketing, transmission and sale of electricity.

The scheme was a huge success, bringing electricity en masse to the Irish people for the first time, and paving the way for the similarly innovative Rural Electrification Scheme which followed 20 years later.

“The vision of ESB was to connect everyone, everywhere in Ireland,” explains Brian McMahon.

Classic photographs, original footage, key facts, and information on the people involved in ground-breaking projects, can be accessed on the website. So too can the story behind the development of the electricity network and details of the various power stations operated by ESB as it brought that electricity to cities, towns, villages and parishes throughout Ireland.

There’s also a chance to look back at some of the classic TV and print advertisements including the iconic 1980s ads: Dance depicting a girl preparing to go to a dance accompanied by the song Dream Lover by Bobby Darin; the Going Back ad from 1988 featuring the popular Dusty Springfield track, 'Going Back'; and Only You – electricity brings living to life with the song Only You by The Platters. This latter ad received a number of awards including first prize for the most Outstanding Television Advertising Campaign at the 34th International Advertising Film Festival in Cannes, 1987.

The history of ESB is interwoven with the socio-economic history of the State. McMahon says that the archive will also be a living history – chronicling the changes that are already in train as ESB continues its transition to sustainable, carbon-free energy.

Those changes will now be available for future generations to see.